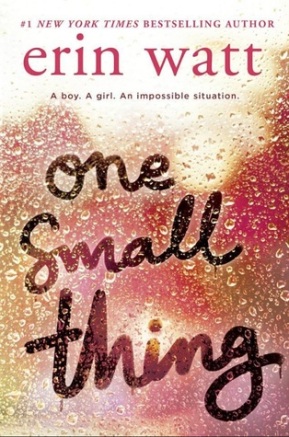 Beth’s life hasn’t been the same since her sister died. Her parents try to lock her down, believing they can keep her safe by monitoring her every move. When Beth sneaks out to a party one night and meets the new guy in town, Chase, she’s thrilled to make a secret friend. It seems a small thing, just for her.

Only Beth doesn’t know how big her secret really is…

Fresh out of juvie and determined to start his life over, Chase has demons to face and much to atone for, including his part in the night Beth’s sister died. Beth, who has more reason than anyone to despise him, is willing to give him a second chance. A forbidden romance is the last thing either of them planned for senior year, but the more time they spend together, the deeper their feelings get.

Now Beth has a choice to make—follow the rules, or risk tearing everything apart…again. (via Goodreads)

I received an e-ARC in exchange for an honest review.

I had really high hopes for this one because I absolutely loved Erin Watt’s previous standalone novel, “When It’s Real”. Not to mention the cover is all kinds of gorgeousness! The synopsis really intrigued me as well; I couldn’t imagine how a romance between a girl whose sister was killed by the guy she was developing feelings for could ever work out and just had to see how the story went.

Right from the start, I got star-crossed-lovers vibes from Chase and Beth. I couldn’t imagine how a relationship between them could possibly ever work out because no matter what, her inner circle – the people who matter the most in her life – would always associate him with Rachel’s death. Whatever connection there was between them would always be tainted with that fact. I tried to think of ways how they could possibly get around such a daunting obstacle and give a relationship between them a chance, but couldn’t think of anything. As the story progressed and we got to know Chase better though, I realized that there was a small ray of light that could possibly be the saving grace for their growing feelings for one another: Despite his part in Rachel’s death, Chase was generally a good guy. He endures a lot of his own difficulties – internally and externally – that are associated with Rachel’s death, and I couldn’t help but admire his strength, determination, and selflessness throughout it all.

Despite doing dumb and reckless things, and needlessly putting herself in dangerous situations, I actually couldn’t help but admire Beth, too. She goes through a lot of change and character growth after the loss of her older sister; turning from a rebellious and reckless teenager, to a more introspective and more mature version of herself looking forward to the future. I also found the depth of Beth’s ability to forgive very admirable, especially considering the circumstances she was in. Not many people can be so forgiving, myself included. I also sympathized with her immensely when she mentioned feeling “directionless” after losing her older sister, but simultaneously felt impressed that she was able to reach an epiphany that helped her realize what she was doing wrong when it came to her paranoid and overprotective parents.

The growing feelings and chemistry between Chase and Beth had me captivated and really invested in their story. A huge part of me felt that it was hopeless and thought that the book might end with them finally realizing they weren’t going to work, but another part of me kept hoping that somehow, against all odds, they would find a way. I really enjoyed their dynamic; Beth’s impulsive, persistent, determined, and feisty while Chase is withdrawn, selfless, honest, and cautious. Chase helped with Beth’s character growth and Beth helped him realize that he still had a future to look forward to.

Since this was an Erin Watt novel set in a high school, I guess I should have expected the soap-opera type of drama but, their previous stand-alone novel “When It’s Real” had minimal amounts of it, so I had high hopes that this would be the same. (And, when I say “soap-opera type of drama”, I mean meaningless mean girls who solely exist to cause drama for the heroine, so-called “best friends” who are so quick to backstab that I question their label of ‘best friend’, stereotypical ditzy girls and bully jocks, etc.) Unfortunately, it was not and felt more similar to their The Royals series. Maybe I should just stay away from their novels that predominantly occur in a high school.

In addition, this type of drama made the side plots really predictable and I found myself rolling my eyes and saying, “Oh, of course that happened” quite often. Every other character who wasn’t Chase or Beth was unlikable and annoying, especially every person from their high school, adult and teenager alike. The students at Chase and Beth’s school were acting more immature than the ones in the public schools, whom their peers viewed as lesser and barbaric, but for stereotypical rich and pretentious high school students I guess that was to be expected. The so-called adults were no better than the students themselves and were useless most of the time, especially when the jocks were blatantly bullying another student – during class, too! It also frustrated me to no end how everyone kept assuming things, especially in regards to Beth’s feelings. I literally wanted to reach into the book and knock all those people out.

Despite its predictability and cheesy soap opera type of drama, I enjoyed “One Small Thing” well enough to be entertained, but what really kept me turning the pages was the development of Chase and Beth’s relationship. I became so interested and invested in their budding forbidden romance, and wanted to see how it all played out in the end. If you were already an Erin Watt fan, or wanted to start reading her books, I would definitely recommend picking up “One Small Thing”. It has its heartfelt moments, angst, and a ton of drama, but highlights an intriguing story of forbidden love and forgiveness.

Erin Watt is the brainchild of two bestselling authors linked together through their love of great books and an addiction to writing. They share one creative imagination. Their greatest love (after their families and pets, of course)? Coming up with fun–and sometimes crazy–ideas. Their greatest fear? Breaking up.