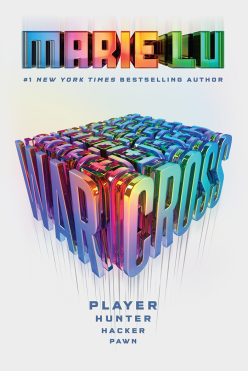 The obsession started ten years ago and its fan base now spans the globe, some eager to escape from reality and others hoping to make a profit. Struggling to make ends meet, teenage hacker Emika Chen works as a bounty hunter, tracking down Warcross players who bet on the game illegally. But the bounty hunting world is a competitive one, and survival has not been easy. To make some quick cash, Emika takes a risk and hacks into the opening game of the international Warcross Championships—only to accidentally glitch herself into the action and become an overnight sensation.

Convinced she’s going to be arrested, Emika is shocked when instead she gets a call from the game’s creator, the elusive young billionaire Hideo Tanaka, with an irresistible offer. He needs a spy on the inside of this year’s tournament in order to uncover a security problem . . . and he wants Emika for the job. With no time to lose, Emika’s whisked off to Tokyo and thrust into a world of fame and fortune that she’s only dreamed of. But soon her investigation uncovers a sinister plot, with major consequences for the entire Warcross empire. (via Goodreads)

When I first heard that Marie Lu was writing a YA book that heavily incorporated video games into the story line, I was so excited and could not wait to read it! The cover wasn’t what I expected but it didn’t damper my enthusiasm for the book at all. In fact, it made me curious as to the color choice because it’s not everyday you get a sci-fi book with large rainbow text on the cover. Also, I wouldn’t go as far as to call myself a gamer because I’m very picky with what games I play and only play occasionally, but I am familiar with video games so Warcross definitely called to me on multiple levels.

As a newbie to Marie Lu’s writing, I wasn’t sure what to expect going into this book. but it didn’t take long for me to be blown away by the world building and cast of characters. Right off the bat I got the sense that Emika’s New York was just like ours today, except for a few technological advancements. When she went to Japan, however, it was a completely other level and felt more like the futuristic sci-fi atmosphere I had been anticipating. I loved all the hi-tech gadgets used in this world, like Emika’s hover board and especially the NeuroLink, the device players use for Warcross. It was thrilling to imagine all these hi-tech devices that seems so surreal yet so close to ones we use today. Oh, but my absolute favorite part of the world building was Warcross the game itself, and the virtual reality worlds the players play in. Learning the rules of Warcross and discovering how each new world looked like was so exhilarating, and is such a fun and unique take on virtual reality games.

Emika is one of my new favorite heroines now, and not just because she’s a cool Asian character and I’m loving the representation in this story. Emika’s incredibly smart and clever, and a badass bounty hunter/hacker with a painful history. She’s resilient and has had to mature and become street-smart to stay afloat in her harsh reality, but doesn’t let her circumstances keep her down. She always tries to find some spot of hope in every problem she encounters, repeating her mantra of “Every locked door has a key. Every problem has a solution” to keep her spirits up. How can I not admire someone like her?

I wasn’t sure about Hideo at first because I just saw him at Emika’s boss, but he quickly charmed his way to my favorites list. Like Emika, he’s incredibly smart and has a difficult past. Hideo’s personality actually complements Emika’s really well, and I can’t help but ship them. However, Emika has a strong sense of morality whereas Hideo is very gray in that area. Hideo is such a charmer, so much so that you’d never even have a clue about his own dark past. I like how they can brainstorm so easily with each other; the just understand each other really well and have such cute banter. Their chemistry is so obvious and one of my favorite things about their dynamic.

And I can’t write this review without mentioning (without spoilers, of course) that insane plot twist that I was not expecting at all! It gave me chills, and left me gaping at my book and feeling so many conflicting emotions that I hardly knew what to do with myself anymore.

On the other hand, despite that shocking initial plot twist I just mentioned, the second major one didn’t phase me as much because I was able to predict it really early on. I also felt that there were some moments where things could have been elaborated upon and explained better, but they weren’t.

Consider me an official fan of Marie Lu because Warcross was phenomenal and blew me away! Such a rich story with amazing world building, diverse cast of main characters, and thrilling adventure that leaves you reeling. I could not put this book down and am looking forward to seeing the story continue in the sequel, Wildcard! 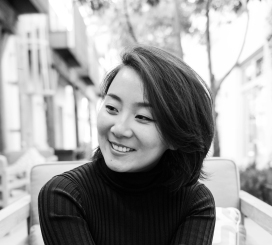 Marie Lu is the #1 New York Times bestselling author of the Legend trilogy and The Young Elites trilogy. She graduated from the University of Southern California and jumped into the video game industry, working for Disney Interactive Studios as a Flash artist. Now a full-time writer, she spends her spare time reading, drawing, playing Assassin’s Creed, and getting stuck in traffic. She lives in Los Angeles, California (see above: traffic), with one husband, one Chihuahua mix, and two Pembroke Welsh corgis.

Have you read Warcross already? Who is your favorite character? Let me know in the comments!

Thanks for checking out my review and I hope to see you again on my next one!

One thought on “Book Review: “Warcross” by Marie Lu”