Ever since my sister bought me a PS Vita two years ago, I’ve been collecting all the otome games I’ve been itching to play all these years. It’s reached the point where I actually have more games to play than time to actually play them; But this year I want to change that and get them done one by one. So, here’s a list of my current top five otome games that I can’t wait to play! 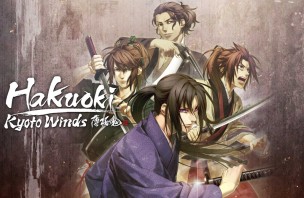 In this historical fantasy visual novel, you play as the young Chizuru, determined to find her father amidst the drama of Kyoto in the Bakumatsu period. Romance the famous samurai of the Shinsengumi as you uncover their dark secrets and come face to face with the mysteries of your past. In this text adventure, choose from a variety of narrative choices and branching storylines that unlock 30 different endings.

This remastered telling of the beloved, visual novel Hakuoki series that was first developed and released in 2008 focuses on the story set in Kyoto, the first part in a two-part series. Now, you can experience new characters, love interests, and episodes in the world of Hakuoki: Kyoto Winds with updated graphics for PC in English, Japanese, and Traditional Chinese!

This remastered telling of the beloved visual novel Hakuoki series is a continuation of the Hakuoki™: Kyoto Winds story and focuses on the story set in Edo, the second part in this two-part series. Fighting alongside the Shinsengumi, the young Chizuru will romance the famous warriors of Japan’s Bakumatsu period through a series of engaging stories and dramatic events. Delve deeper into the hearts and secrets of each warrior bachelor as you explore the world of Hakuoki and navigate its intertwining, branching narratives to unlock multiple endings. Find true love in the journey to Edo – your choices decide your fate!

I purchased the special editions for both of these games before I had a PS Vita to play them on, so that postponed my playing but I already knew I would love the game because I had already played the original English version on the PC and absolutely fell in love with the story and world! This newer version is more succinct and I am so grateful for that because one of my major complaints about the original was all the unnecessary history lessons that didn’t really serve any purpose except providing useless background info. There are also three new characters added into the mix and I’m so curious about them. I saw how they look like at the Hakuoki events I’ve attended in the past, but know nothing else. I can’t wait to see how they’ve been incorporated into the story and with all the Shinsengumi that I already know. I’m also very curious as to why one lengthy game was re-done and split into two separate games.

Collar × Malice is a visual novel, and follows Ichika Hoshino, who is patrolling Shinjuku, Tokyo. She is attacked, and a collar with poison is placed around her neck; following this, she becomes involved with the “X-Day Incident”, which is being investigated by five former police officers. (via Wikipedia)

The mystery and action from the synopsis of the game and the intro movie are what caught my attention, but it was a sale at the PSN Store that convinced me to purchase this game. I’ve heard mixed reviews about this one and the art style is different than what I usually gravitate towards, but I want to give this a chance. It looks action-packed and gritty, with some mystery and suspense mixed in. I’m really curious to see how the mystery unfolds and I love how the main character is a cop. I really hope she’s as badass as I’m imagining her to be!

Made by the Masters of the Tome genre, idea factory and design factory, code: Realize ~wintertide miracles~ continues the adventures of the poison-skinned maiden Cardia and a selection of famous (and famously handsome) figures from Western literature as they face new challenges, new friends and foes, and new opportunities for love.

I didn’t realize we would be getting another Code Realize game until it was announced last year and I couldn’t have been more excited! Gimmie all the Code Realize, please! I can’t wait until I can afford to buy the special edition of this game, too! I don’t know much about this third sequel, just that its winter themed but I already know that I need to have it in my collection of Code Realize games.

The story begins with the main character, Cardia, isolated and alone in a mansion on the outskirts of a 19th century steampunk version of London. A victim of a mysterious affliction that makes her blood a virulent poison and her touch instantly lethal, Cardia is shunned as a monster. Through a number of events both grand and seemingly insignificant, Cardia is pursued by the Royal Guard, kidnapped by the gentleman thief Arsene Lupin, and joined by a myriad of other handsome figures out of the best of western literature. With her newfound friends (and suitors) Cardia ventures out in the world to unravel the mysteries surrounding her very existence.

Honestly, I’ve only played about 20 minutes of this game because I was rushing through it. I love this series after having played the original game and then watching the anime, but I didn’t know much about this ‘sequel’ and was concerned that it was going to be a short game filled with side-stories. After having rushed through as much of Lupin’s (my fave husband) story as I could before bed, I started to realize that it was definitely longer than I had anticipated. I was so relieved and excited! I haven’t had the time (being so busy with work, taking care of my pups, and still going through depression) or motivation to play yet, but I am definitely going to have so much fun playing this. I absolutely fell in love with Lupin and Cardia’s story in the original game and I cannot wait to see what this sequel has in store for them!

Aksys Games and Idea Factory (creators of the Hakuoki series) proudly present Norn9: Var Commons. The beloved Japanese adventure series makes its long awaited US debut! Players will be tasked with unraveling a vast mystery that will test the very limits of time and space! Disoriented, you find yourself aboard a mysterious aircraft with twelve other young individuals. Possessing fantastical powers that defy logic and elude reason, each passenger represents an arcane piece in an unknowable puzzle. What is the purpose of their journey? What is their destination? Prepare yourself. Join the voyage to reveal the truth!

My friend recommended this game to me ages ago but I hadn’t owned a PS Vita yet at the time, so I ended up watching the anime first. I really enjoyed the story and was completely fascinated by the world the characters were in, but I found the main character and her love interest absolutely annoying. They were such Mary/Gary Stu’s; I found the side characters personalities and story arcs way more compelling and entertaining. That’s actually one of the main reasons why I finally bought the game when it was on sale in the PSN Store! I was tired of the main couple and wanted the story to focus on the other two girls, and they are going to be my first playthroughs of this game once I get further into it. I can’t wait!

If you play otome games, which ones are you looking forward to playing? Let me know in the comments!