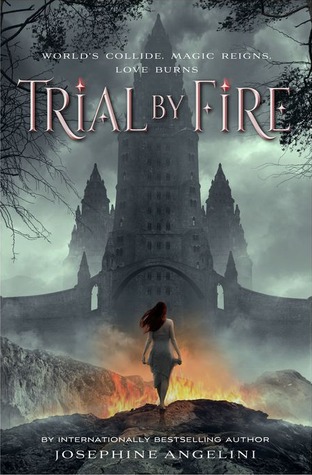 This world is trying to kill Lily Proctor. Her life-threatening allergies keep her from enjoying experiences that others in her hometown of Salem take for granted, which is why she is determined to enjoy her first high school party with her best friend and longtime crush, Tristan. But after a humiliating incident in front of half her graduating class, Lily wishes she could just disappear.

Suddenly, Lily is in a different Salem—one overrun with horrifying creatures and ruled by powerful women called Crucibles. Strongest and cruelest of them all is Lillian . . . Lily’s other self in this alternate universe.

What makes Lily weak at home is what makes her extraordinary in New Salem. In this confusing world, Lily is torn between responsibilities she can’t hope to shoulder alone and a love she never expected. (via Goodreads)

Okay, backstory! I started reading “Trial by Fire” a few months after I first met the lovely Josephine Angelini at The Festival of Books back in 2015. I got through the first couple chapters then borrowed the audio book so my friend and I could listen to it during our five hour road trip to Cassandra Clare and Holly Black’s book signing in Menlo Park. Back then, I had only tried audio books a couple times and never really liked any of them. When I tried it for this book, however, I couldn’t help but become instantly immersed in the story and was then hooked on audio books from then on out. We managed to get through more than half of the book by the time we returned from our weekend trip and we were absolutely obsessed! I couldn’t wait to get home, unpack, and continue reading from my hardcover copy. More recently, I reread it on audio again when I was a in a terrible reading slump and it reaffirmed my absolute love for this world of magic, witches, alternate universes, and disturbing creatures.

Josie’s world-building in the World Walker trilogy is absolutely gorgeous and so captivating. From the moment Lily entered the alternate version of her hometown of Salem I felt such a sense of wonder and awe, as if I were the one teleported there. I could clearly imagine the odd congruity of modern Salem juxtaposed to magical Salem, as Lily wandered the city streets, seeing strangely intelligent-looking, mismatched beasts acting as guard dogs. The magic system is so different than anything I’ve ever read before: any sort of magic capabilities that witches have in this alternate Salem could be explained with science, specifically the transmutation of energy. Not only does it help ground the fantasy elements to reality, but also gives the universe its set in another layer, adding to its complexity and depth. I need to figure out how Josie is able to create such an in-depth and intricate world, but have everything perfectly fit and make sense without the cop-out answer: because magic.

Josie has such a beautiful writing style and talent for story-telling; it’s easy to follow along, engaging, and captivating. But she really shines with her world-building and character dialogue. I absolutely adore her colorful cast of characters, especially Lily, her sister Juliette, Tristan, and Rowan. The bond between the sisters was so heartwarming and endearing, I couldn’t help but feel that sense of connection to Lily and be reminded of my own sister. Next to that relationship, my next favorite was definitely the obvious chemistry between Lily and Rowan. As weird as it was that he was the former love interest of her alternate self, Lilian, I couldn’t help but ship Lily and Rowan right from the beginning. Their relationship was founded on the basis of trust and understanding, and I am such a huge supporter of that. Normally, slow-burn romances frustrate me a little (because I’m impatient and such a hopeless romantic so I just want people to be happy together) but I actually did not mind at all in this case because their banter throughout the journey was so entertaining.

One of the major aspects of Trial by Fire that really drew my attention was Lily’s character arc and her conflict with her alternate-self, Lilian. I love the whole concept of your alternate-self being the villain in another world.; it really made me think about the well-known debate of nature vs. nurture, how someone becomes a villain, and about the fine line between being viewed as a villain and as a hero.

The only significant problem I had with this book was the occasional info dump where the narrator would ‘tell’ us about the world and how it worked. I can usually overlook this if its done sparingly, but to have noticed it several times makes me think it was just done too often. It felt like there was too much ‘telling’ and not enough showing, so sometimes I found my mind drifting and I started to get bored, so I would skip ahead until the pace picked up again.

I cannot rave about this book enough! It’s one of the few books that I actually have the urge to reread over and over again, even right after I’ve finished it. Fantastic world building with compelling characters, entertaining banter, and fascinating magic system. I don’t really know what else to say except pick up this book! Oh, and the next two just in case because after reading the ending you’re going to want to immediately jump into the next one, and lucky you won’t have to wait!

Josephine Angelini is a graduate of New York University’s Tisch School of the Arts in theater, with a focus on the classics. Originally from Massachusetts, she now lives in Los Angeles with her screenwriter husband, daughter, and two shelter cats. Her debut series, Starcrossed, Dreamless, and Goddess, (Harper Teen) are all international bestsellers and have garnered the praise of various major publications, including the LA Times, and have twice won the Reader’s Choice Awards in Germany. Her second series, the WorldWalker Trilogy (Trial by Fire, Firewalker, Witch’s Pyre) published by Feiwel and Friends (Macmillan) is also an international bestseller, and has garnered the praise of publications such as USA Today, and many others.

Have you read Trial by Fire yet? Let me know your thoughts in the comments and let’s fangirl/discuss!

One thought on “Book Review: “Trial by Fire” by Josephine Angelini”